12 May, 2014 In Interviews Publication Journey Writing

Hello lovely readers! Man has this year flown by so far. Big apologies for not writing on here more – it’s utterly shameful that we’re almost half the way through 2014 and I’ve posted less than ten times this year. *Claps wrists* I just don’t know where the months have gone. I guess that’s something I wasn’t prepared for about being published. There are periods of near-inactivity, or at least steady activity, when you’re getting on with writing a new book – and then suddenly WHAM, here’s a bunch of edits on that other book that need doing. And of course that’s when life decides to mess with you and you get a series of illnesses and injuries and personal problems, and basically just every non-writing related drama to add to the pressure.

But, fingers crossed, the clouds finally seem to be clearing on my horizon, so let’s hope I’m finally emerging from the crazy! And to celebrate the hopefully non-crazy months coming up (though I wouldn’t hold my breath) I have something exciting for you today. As hearing about other authors’ writing and reading habits and preferences is something I really enjoy, I thought I’d start a new interview series asking authors to share with us just that! There’ll be one interview a week, alternating between questions about writing and reading. Most of the authors will be fellow YA writers, since that’s what I write and enjoy reading the most – and what you guys are most probably interested in too if you’re here reading this blog 🙂 Hopefully you find the questions insightful and inspiring.

Kicking off the interview series today is the wonderful Kate Kelly, a marine scientist and YA sci-fi writer right here in the UK! Her debut novel Red Rock is published by Curious Fox. Take a look at her blog for updates on Kate’s writing life. I haven’t gotten round to reading Red Rock yet, but it’s waiting patiently on my Kindle and I can’t wait to get stuck in! A fast-paced sci-fi thriller for teens with a touch of romance? Um, yes please. So let’s get strated with the interview and find out more! 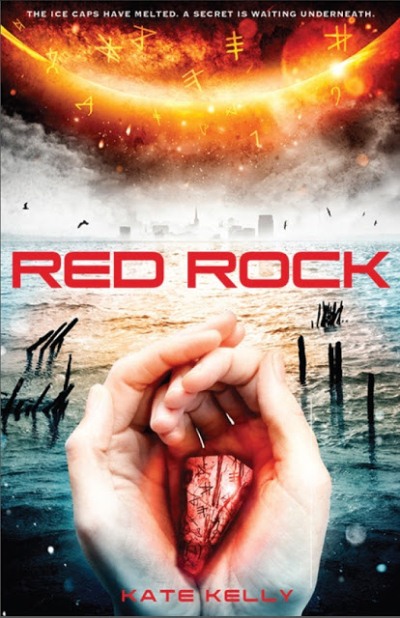 The ice caps are melting and secrets are revealed – but what is so important about a small red rock…?

Some years ago my work as a marine scientist took me to the Arctic. We steamed along the marginal ice zone just off the coast of Greenland and as I watched the ice slide past, the seals, the puffins and occasional polar bear, I began to wonder what the world would be like when the ice caps were all gone – and about how we don’t really know what lies underneath. At about the same time I read a paper speculating about a mysterious white rock observed by the Mariner 9 spacecraft of the Martian surface. The two threads came together and the idea for Red Rock was born.

I’m a mixture of the two. I like to have an outline to work from, and I definitely need to know how the story is going to end, but I also love it when my characters surprise me along the way. Often their ideas are better than my original plan, so my outline tends to evolve as the story grows.

I think the hardest scene to write was the scene where they meet with Lucy in Oxford (which won’t mean much to you if you haven’t yet read Red Rock). There is a lot of important information divulged and it was a tricky balance to stop it turning into information overload.

When I was recognized in a shop in town by a boy who’s school I’d visited a few weeks earlier. He pointed me out to his mother and insisted she came over and talked to me.

Tricky one. I’ll go with the opening – “I’m not sure why I looked towards the window at that moment.”

My late father was also a writer. In fact it was his example that inspired me to embark on this journey. Sadly he wasn’t around to finally see me published and I have so many questions I wish I could ask him.

I’m a bit superstitious so I don’t like to say much about what may be coming next from me, just in case it doesn’t work out. Maybe I’ll write another Cli-Fi. Maybe I’ll do something completely different. There’s a good chance that there’ll be a bit of science in it somewhere – I do work as a marine scientist after all.

Make sure each book your write is better than the last one.